Led by the B’SaN Association

In view of the proposals formulated in the “Tracking and Diagnosis” report conducted by B’SaN Asso, the month of August 2014 was dedicated to the operational launch of the actions:

B’SaN Asso, accompanied by Aéropartage Mada, was received at length by the Mayor of the Municipality of Iarinarivo. This meeting was an opportunity to get to know each other better, to present in detail the Nutrition project, to have the support of the local authorities and to collect their needs and suggestions. The project has been adapted accordingly. Especially during the diagnostic survey, B’SaN Asso strongly noted the lack of hygiene and comfort of children who ate on the floor, in the dust with utensils and old dishes. It was therefore discussed at length with the Mayor, the administrative possibility of building a canteen shelter and also an adjoining kitchen space. It was at this time that B’SaN Asso and Aeropartage received the favorable opinion of the authorities of the Commune and also of the school environment to build a canteen for the children of the Tanjondroa school.

Looking for a local partner for the construction of the canteen

In order to launch the canteen construction project, which is an integral part of the “Nutrition” project, B’SaN Asso immediately started looking for a partner at the local level. It is the Association EZER that has volunteered to contribute to this ambitious but essential project for the smooth running of the Nutrition project. The location, plans, schedule, organization were seen together and validated by the local authorities. It was agreed in particular that parents of pupils will be the workers who will contribute to this construction.

Construction of the first canteen and introduction of diversified meals:

On November 18, 2014 the first canteen was inaugurated. Meals are now served in a clean and protected place. Thanks to B’SaN Asso, EZER and Aéropartage but also thanks to the FRAM, the association of parents of students who did an extraordinary job by mobilizing themselves day after day each turn to build the building as quickly as possible. Since October 2014 until today, the second meal has been improved by introducing more varied foods (vegetables, meat etc …). 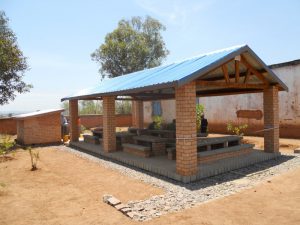 The contribution of Newrest MADAGASCAR will be used to help diversify the foods offered to children and to ensure the introduction of a protein and calcium intake through donations made by NEWREST every month. An envelope per month offered free of charge by NEWREST is a great help in achieving this diversification goal.

As part of this duplication from the pilot project above, B’SaN Asso could have the support of the Bel Foundation for the construction of a second canteen. It consists of the construction of a canteen structure, an adjoining kitchen shelter equipped with an ecological cooking system as well as utensils necessary for the preparation of meals and serving meals at the table. The village is located in the community of Iarinarivo commune and the project took place in the Iarinarivo primary school (150 students).

Strategic coordination was provided by B’SaN Asso who was in charge of project planning in relation with elected representatives and local partners and was also the official interlocutor of local elected representatives concerning the project, particularly with regard to the implementation of the project. structure, the conditions for carrying out the work. A general meeting with the president of the parents’ association and the director of the school in the presence of the B’SaN representative, Aéropartage and the president of the EZER Association in charge of coordinating the work. The goal is to have everyone’s support for the project. These preliminary strategic steps useful to the good execution of the project took place in July and August 2016.

The authorization obtained, the EZER association worked on the architecture of the structure, its implementation and the planning of the works. It is therefore a structure with pillars and without walls (given the hot climate) consisting of bricks, iron, and stones. The tables and benches are frozen on the ground to prevent theft and vandalism. They are also in brick, dressed in bright tiles to facilitate cleaning and maintain hygienic conditions. As far as possible, all materials have been commissioned at the local company level to promote local development and save CO2. The main activity of the families of this sector being the manufacture of bricks, bricks

Social entrepreneurship operation “from the rice field to the canteen”:

In order to initiate the “social entrepreneurship” component, B’SaN Asso has contracted a collaboration with local farmers for the specific rice crop (Malagasy main dish) to supply the canteen. The farmer, beyond the period of rice cultivation, will be able to enjoy the land use to plant other seeds and benefit from them. Several hundred kilograms of rice were harvested in 2017 to supply the canteen.

Point of rest as long as poverty and inequality persist. Together, let's make the difference!